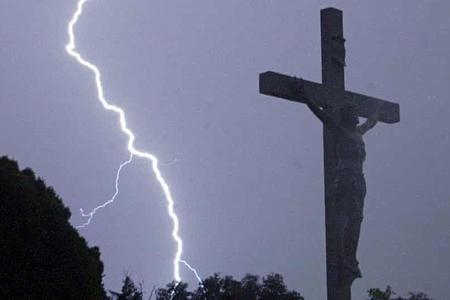 This year we are talking about different "elements" of earth.

Lightening is energy manifested in light and heat and astounding energy. In Fort Worth Texas a bolt hit the top cap of a buried diesel tank at a filling station. It blew the pump right out of the ground and left a crater of asphalt and cement 3 feet deep and 9 feet across. They say it was fortunate there was just a little bit of diesel in the tank and it did not hit the full gasoline storage a few feet away. THAT would have been a bigger crater for sure!

We of course know lightening in it’s more familiar form and the forests fires it brings! But in Scripture it is termed to be the “fire that falls” from heaven…with the plague of hail on Egypt, with the prayer of Elijah on Mt. Carmel and twice on the captains and the 50 lackies of wicked King Ahaziah. It is also the thing for which the disciples asked when a particular Samaritan community rejected them, When the disciples James and John saw this, they asked, “Lord, do you want us to call fire down from heaven to destroy them?” Luke 9 Maybe that is why these brothers were called, “the Sons of Thunder”!  In a storm it so frightened Luther that he called on saints and swore to become a monk! But Luther would not end that lesson in fear…but in finally understanding the work of Jesus. Jesus says his second coming will be “like lightening” flashing across the sky. It will not be missed! It will be quick. But the remarkable thing about lightening is that we have learned to be “safe”. Benjamin Franklin, among others, learned in the 1700’s how to divert the energy of lightening around a building and safely into the ground. Churches were known for getting hit; they were usually the tallest thing for miles! There were even laws against ringing church bells in storms…lightening traveled down a damp rope all too easily and a good bell ringer was worth his weight in bronze! There were some churchy folks who thought lightning rods were “faithless”, but soon insurance companies required them on barns or houses and churches. The experts say a rod of just ¼ or ½ inch positioned at the highest point with a wire just ¼ inch thick will handle any lightning bolt. That is where we see God. Not in the destruction of fiery bolts like Thor, but in the person of Jesus Christ hung high upon a hill outside of Jerusalem. The wrath of God fell on him so that it did not fall on us! Destruction from on high was never God’s intent, but men playing in the clouds and winds of a rebellious world are messing around where they should not be. Our refuge is under the cross of Christ as He takes the full charge of God’s lightening bolt of the law. As for those sons of thunder who wanted to see the lightening fall: Jesus turned and rebuked them! I remember a summer afternoon in the Black Hills with a handful of youth and families swimming in a lake. Suddenly the moms on shore yelled at us to get out of the water. Our hair was standing up on end! We were very close to a lightning bolt! Our business is to give the grace of God’s rod in Jesus – NOT to wish them struck. We stand on the shore and beckon them to a safe place – under the cross of Christ!           Lord, grant us love to show your love as you spared us. Grant us wisdom to stand where it is safe and avoid the destruction rebellion brings. May we show others the cross under which they are spared. We call down your grace and truth in Christ that people safe in this present storm. ​